The Kitties of SERGEY TYUKANOV

All these surreal kitty paintings are made by Russian artist Sergey Tyukanov, a talented master who exposed his work in major galleries from Russia, US, Japan, and major European countries.


His Artworks will  blow your mind. Not just the kitties, but all his works are amazing.
You can visit his e-gallery which is the coolest gallery in the world.
Check his website : Sergey Tyukanov 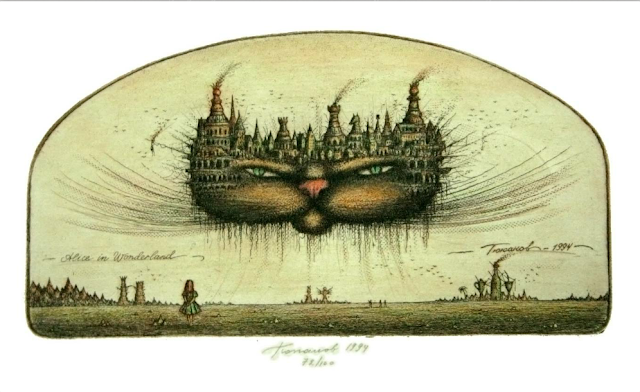 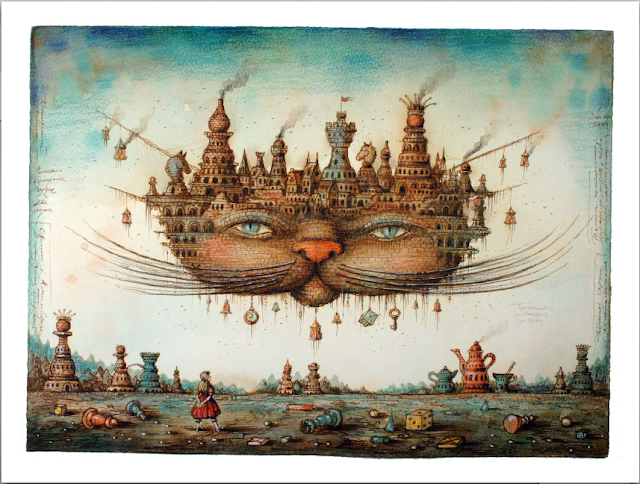 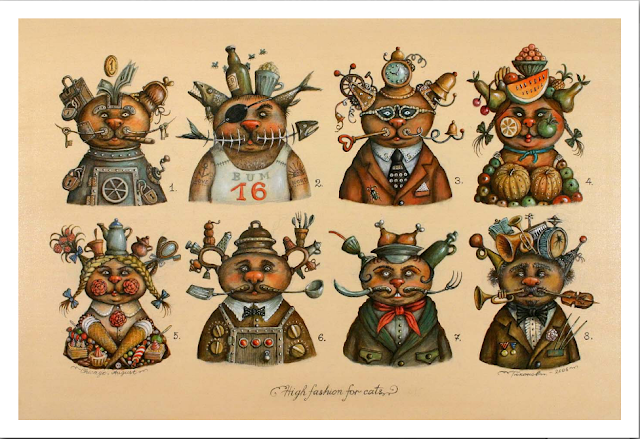 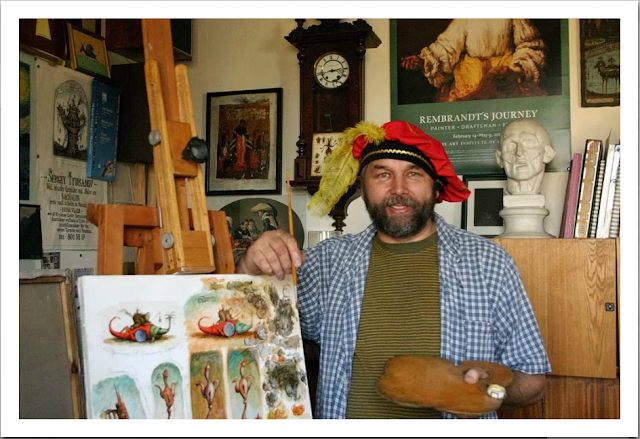 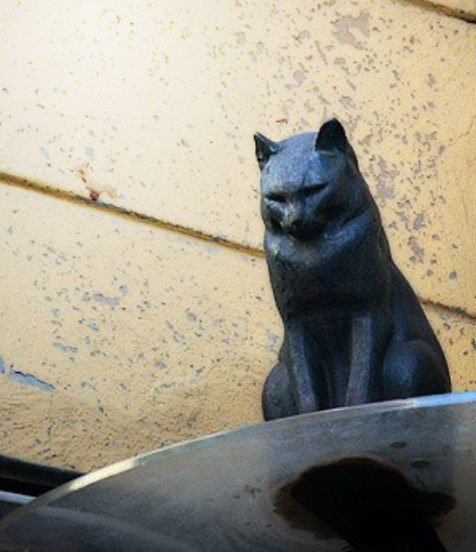 In Russia , during the course of the siege in world war II, most of the city’s pets were killed for food, but the authorities soon found that the lack of cats was causing a public health menace.
Rats multiplied, leading to unsanitary conditions, an increase in disease, and shrinkage of food supplies. What to do? 5,000 cats were brought in from other cities, and they put things right in short order. Rats were brought down, ergo, they didn’t eat up precious food stores or leave droppings that caused human illness.
There’s a monument to Yelisei the cat… for good luck, the people of St. Piter say that you should toss a coin at his feet… try it, it just might work for you.
Posted by Mr Puddy at 7:09 PM 8 comments: 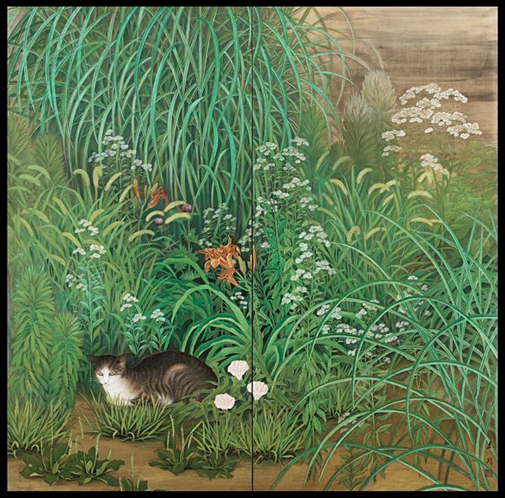 Byōbu or folding screen in two panels, painted on silk in sumi ink, gofun or clam shell gesso and mineral pigments with a scene of a striped, black and white cat lying among flowering plants and grasses in a summer garden. Signed on the lower right by the artist: Hakuhō, and sealed: Hakuhō (Kagayama Hakuhō, the gō or art name of Kagayama Rinjirō, born 1880). With black lacquer frames. Late Taishō – early Shōwa era, circa 1920 – 1930.
Kagayama Hakuhō was born in Okayama Prefecture in 1880. He moved to Kyoto to study painting under Takeuchi Seihō, and later lived and worked in Kobe. He also used the art name of Hakugai. One of his paintings, titled Clear Autumn Sky, is in the collection of the University Art Museum, Kyoto City University of Art.
Amid the lushly green foliage of a summer garden, a resting cat watches alertly. Hakuhō frames the composition with a diagonal cascade of tall grass and flowering plants. Rendered with great realism, orange lilies, blushing morning glories, purple thistles, and small white wildflowers glow in the sunlight. Light washes the foreground and brightens the light green foliage from the left. The gold-washed earth recedes beneath the plants. In the upper right, dark-silver shadows the empty ground. This shade balances the dark greys and blacks striping the cat, which stares out to the open path below the painting’s margin.
With very fine brushwork, Hakuhō uses lavish amounts of malachite green with touches of lapis blue, detailing the brush-tailed grasses and wildflowers in moriage relief, thickening pigments on the broader grasses, and scattering mica to brighten the surface of the sun-dappled garden. Some of the weeds shiver in the wind, their drawn edges mismatched to the wavering pigment. This style of luxuriant naturalism was taken up by a number of talented artists in the later part of the Taishō era, but rarely with as much charm as here in Kagayama Hakuhō’s summer garden.
The small, daisy-like wildflowers are harujion (Erigeron Philadelphicus, commonly known as daisy fleabane and as frost root). First brought to Japan from North America in the Taishō era, harujion were exotic and fashionable additions to the gardens of the era.
68” high x 68 ½” wide, when opened flat.
Posted by Mr Puddy at 6:42 AM 6 comments:

The Most Beautiful Cat Painting in the world

My mom really love this painting. For her, This is the most beautiful cat painting. She wish one day she can paint like this. 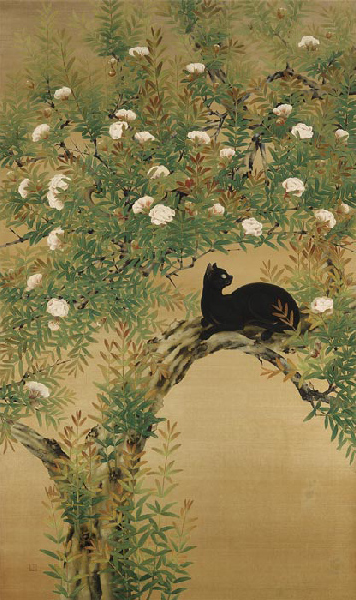 Titled: Hana Zakuro or Flowering Pomegranate
This painting was first exhibited at the 11th Teiten in 1930, where it was acquired directly from the painter by the art patron and collector Hosokawa Rikizō. Along with the rest of his painting collection, it entered the Meguro Gajoen Museum Collection after the Pacific War, from which it was acquired by Kagedo in 2003. It is illustrated in the Nittenshi
Born in Shimoina County in Nagano Prefecture, Kamewari Ryüji was first apprenticed to a yūzen dyer for whom he was employed to draw the under-designs. Ambitious to become a Nihonga painter, he moved to Tokyo around the age of 22 to study at the Kawabata Painting School (Kawabata Gagakkō).

On September 1, 1923 the Great Kantö Earthquake leveled Tokyo, forcing his return to Nagano. As life gradually returned to normal in the capital, Ryūji was able to return to Tokyo in 1926 to study under Tsutaya Ryūkö. Ryūji’s painting Kachō no Zu (Birds and Flowers) won 1st Prize in the 4th Nihonga Painting Association Progressive Exhibition (Nihongakai Kakushinten).

In 1926, he first had a painting accepted to a government-sponsored exhibition, the 7th Teiten, and continued to exhibit at six others in subsequent years. After his teacher Ryükō died in 1933, Ryüji began studying with Araki Jippo. In 1936, he exhibited at the Bunten Kansaten, and in 1943 at the 6th Shin-Bunten.
After the Pacific War, Ryüji showed at a number of Nitten, beginning with the 2nd exhibition in the autumn of 1946. He joined the Kokudokai painting group in 1947, and returned to using his given name as an art signature to prevent confusion with another member. His Nitten painting won the tokusen or grand prize at the 6th Nitten in 1950. In 1954, he was granted mukansa or non-vetted status. Kamewari Ryūji died January 15, 1981 in Nerima Ward, Tokyo.
Kamewari Ryūji is remembered as an artist who was particularly skilled in richly detailed bird-and-flower paintings. His work is in the collections of the Matsumoto Municipal Museum of Art and the Iida Munici-pal Museum of Art.
With Flowering Pomegranate, Kamewari Ryüji paints a scene of delicate beauty. The composition arcs up and towards the right with the great, twisting bole of the tree, cut off by the frame of the painting. Atop the branch lies a sleek, black cat, its pale green eyes narrowed on prey beyond our view. Empty space halos the trunk, the void below the branch balanced by the black intensity of the feline and the cloud of blossoms and greenery above. 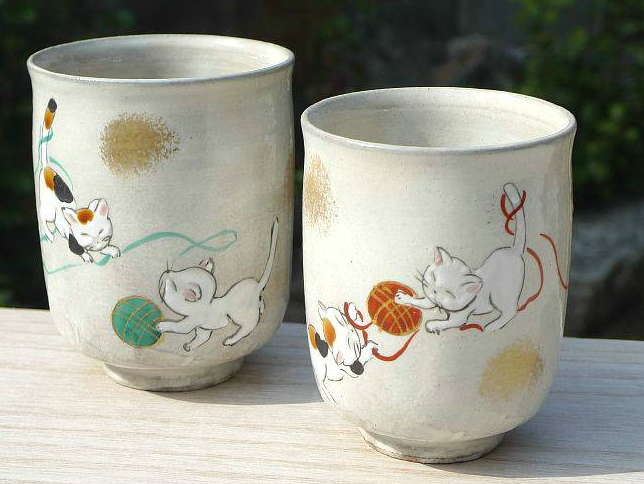 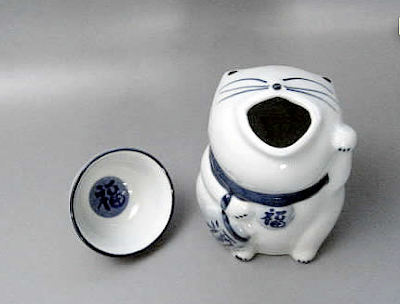 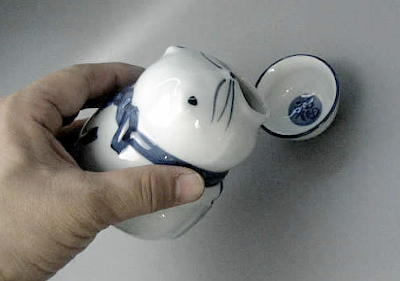 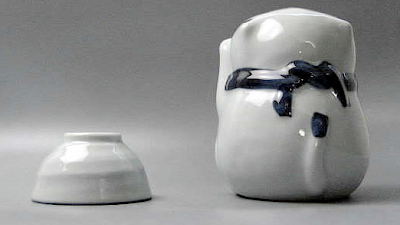 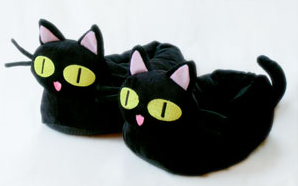 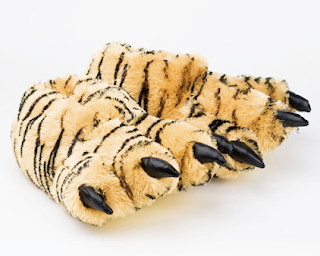 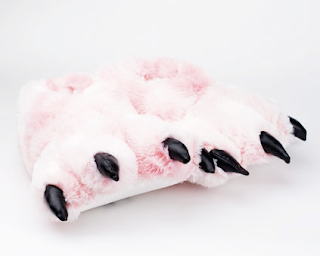 All Above By Bunny Slippers 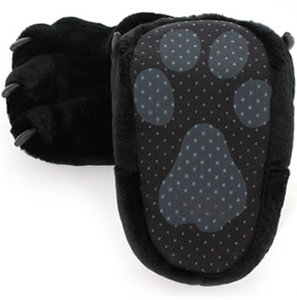 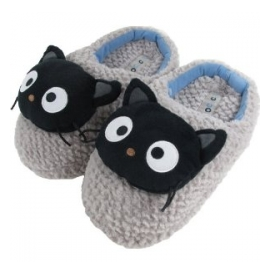 More Blogs of Mine